NOTE: During configuration or flashing a device, the only that should be hooked to the device is the computer and power.

Source Beginning with the introduction of the N4100 NAS device, Thecus has rocked the world of digital storage with innovation after innovation. Today, Thecus is proud to reveal the brand new 4-bay NAS – N4100PRO. With powerful new RAID options, a built-in LCD, and vastly improved data throughput, the N4100PRO ups the ante once again with increased usability, functionality, and performance.

Powered by the AMD Geode™ LX800 processor and 256MB of DDR400 memory, the N4100PRO delivers the raw horsepower required to transfer files quickly and efficiently. With updated hardware and a ton of performance improvements, the data transfer speed of N4100PRO doubles that of the original N4100! Four 3.5" SATA hard disk bays enable sufficient storage for all usages, and users can manage this space with an updated list of RAID mode selections, including 0, 1, 5, 6, 10 and JBOD. The N4100PRO also offers advanced RAID management features, including RAID expansion and RAID level migration for ultimate flexibility. To top it off, the N4100PRO comes equipped with a big, bright LCM module, which displays useful status messages such as IP address, date and time, and RAID status, making it easy for users to keep an eye on the condition of their N4100PRO. With features like these, the N4100PRO is easier to manage than ever.

“The feature-rich Thecus N4100PRO combines innovative design and the low-power, high-performance of the AMD Geode processor to deliver a robust storage solution,” said Buddy Broeker, director of AMD’s Embedded Computing Solutions Division. “The N4100PRO offers a compelling solution for households to easily store and share their digital media throughout the home network.”

The N4100PRO also brings a huge selection of useful features to the table. To keep multimedia moguls happy, the N4100PRO can act as a media server, iTunes server, and photo web server at the drop of a hat. The included download manager makes it easy to schedule and download BT, HTTP, and FTP downloads during off-peak hours, and IP Cam support allows users to turn their N4100PRO into a home surveillance unit. The N4100PRO can mount ISO files and share them across the entire network, and users can even further expand its functionality with module support.

“We created the N4100PRO with speed and total security in mind,” notes Thecus General Manager Florence Shih. “With new features, increased reliability, and enhanced performance, users will discover that the N4100PRO is a more than worthy successor for the four-bay N4100 that started it all.”

System Information at a GlanceEdit

Equipped with a big, bright LCM module, the N4100PRO displays useful status messages such as IP address, date and time, and RAID status, making it easy for users to keep an eye on the condition of their N4100PRO. With the LCM module, N4100PRO users can even configure the unit in a dimly-lit living room for added convenience.

The N4100PRO also improves on its predecessor by adding RAID 6 and RAID 10, providing users have even more options for data storage. What's more, the N4100PRO also supports RAID expansion, allowing users to add more storage to their RAID volumes as their needs arise. With the N4100PRO, users have the flexibility to store their data their way.

Being able to connect to your storage unit at all times is essential. That's why the N4100PRO comes with network bonding in fail over mode. With this feature, the N4100PRO can automatically switch to its second Gigabit Ethernet port should the first one fail for any reason. The result is a zero network downtime and increased reliability for N4100PRO users.

Those familiar with Thecus products know of their extreme performance. For the N4100PRO, Thecus has raised the stakes by more than doubling the data transfer performance of its predecessor, delivering data transfer speeds of 35MB/sec! Equipped with the N4100PRO, media enthusiasts and SMBs don't have to wait around when accessing their data.

Get the most out of your storage space with the extreme speed of iSCSI and the efficiency of iSCSI thin provisioning. Connect through iSCSI for the fastest data transfer speeds available and make wasted disk space a thing of the past with thin provisioning's flexible storage functionality. 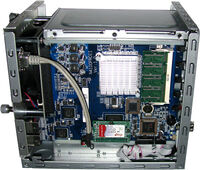 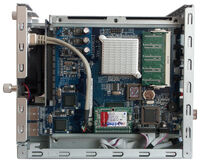 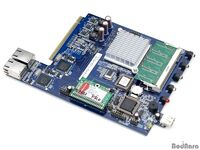 I just ordered this unit alone with:

Q - Once installed, is there any way to confirm the new memory is being recognised? Apart from the fact it works!

A - Yes, use the INFO module or check it on commandline via linux commands

Retrieved from "https://infodepot.fandom.com/wiki/Thecus_N4100PRO?oldid=30443"
Community content is available under CC-BY-SA unless otherwise noted.